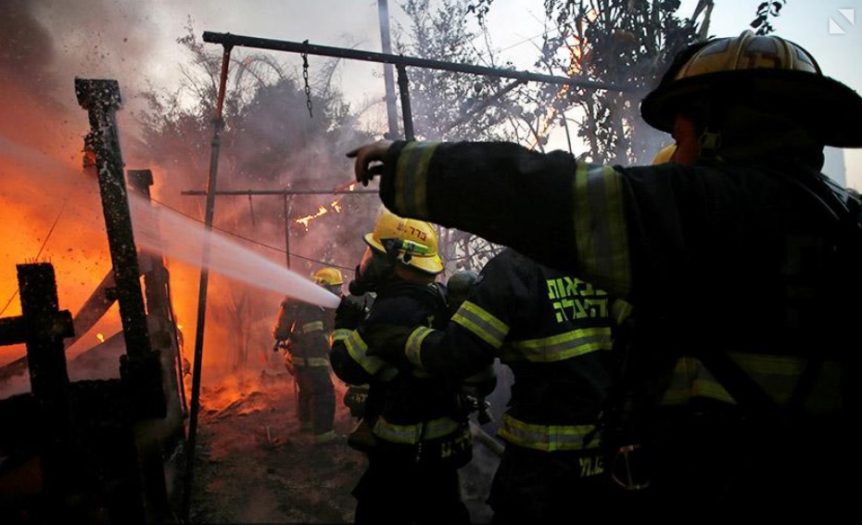 A wave of arsons has swept the Jewish state, but there is hope amid the flames. Israel is engulfed in flames. In the last week, over 1,000 homes have been damaged or destroyed nationwide, 60,000 residents have been evacuated, over 200 people have suffered injuries, and more than 30,000 acres have burned countrywide in a series of fires near highly populated areas. From the forests in the Jerusalem hills to the Jordan River Valley to the Negev Desert to the eucalyptus groves along the coastal plain to the wooded canyons of Haifa to the highlands of the West Bank, the flare-ups have spanned more than a hundred miles across nearly every region of this small country. Negligence apparently sparked some of the blazes, and the unseasonably hot, dry, windy November weather fanned the flames, making it difficult for firefighters to control their spread.

But many of the fires are believed to have been intentionally set by Palestinian terrorists seeking to harm Israelis any way they can. Some perpetrators were caught red-handed, while others were traced back to smoldering tires and remnants of Molotov cocktails found near some blazes. As if suicide attacks, rocket firings, bus bombings, mass shootings, and stabbing campaigns weren’t murderous enough, die-hard militants have now added arson to their arsenal. Meanwhile, the inevitable #israelisburning hashtag trended on Twitter throughout the Arab world, with most of the accompanying anti-Semitic filth far too gruesome and dehumanizing to link to, let alone reproduce. Just as inevitably, some on the Israeli left sought to explain away those Palestinian arsonists who set fire to Israeli towns built on or near lands abandoned by Arabs during Israel’s 1948 War of Independence, while on the extreme right, some Israeli Jews cast wider-than-necessary aspersions on their Arab neighbors.

But a glimmer of hope emerged from the fires, as well. First, as it always does, Israeli civil society rose to the occasion, assembling care packages, clothes, supplies, food, and toys for those whose homes were burned. Others volunteered to patrol forests and alert authorities to suspicious activities. Second, a wide variety of countries — including the U.S., Russia, Greece, Italy, and Turkey — have provided assistance in the form of planes, helicopters, equipment, and firefighters. Even Israel’s Arab neighbors sent help, including Jordan, Egypt, and the Palestinian Authority, which dispatched more than 40 firefighters and several trucks to douse the flames. Prime Minister Benjamin Netanyahu thanked Mahmoud Abbas, his Palestinian counterpart.

Israel’s parliamentary opposition leader praised Palestinian firefighters who “stood shoulder to shoulder with our firefighters, risking their lives to assist,” and the Palestinians responded in kind. More Israel ‘There He Goes Again’ — Jimmy Carter Blames Israel One More Time Is Obama Preparing a Parting Shot at Israel? Disappearing the Jewish Connection to the Temple Mount Third, Arab towns, mosques, and support centers opened their doors to Jews, Christians, and Muslims. In a statement, the Islamic Movement of Israel established a “situation room” in Kafr Qassem, saying: “In all of the Arab communities the hosting is for citizens, Arabs, Christians, and Jews, without differentiation. Dozens of families from the Arab population are prepared to host families harmed by the fires in Haifa and the country, Jews and Arabs alike.”

In a country where Arabs and Jews live cheek-by-jowl, both natural and man-made disasters tend to affect both groups, if not always equally. In the words of Ayman Odeh, the sometimes controversial leader of the Arab bloc in Israel’s Knesset, “this is a thing that hurts us all; this is not about Arabs versus Jews. Whoever did this is the enemy of us all.” Of course, the fires also aroused tensions, and the goodwill the common suffering engendered may well prove short-lived. Yet it’s exactly that hope for a calmer, friendlier future, however faint it may be, that buoys Israeli spirits in tough times. Israel may be endangered, but it remains optimistic that better days are ahead. — Michael M. Rosen is an attorney and writer living in Israel.